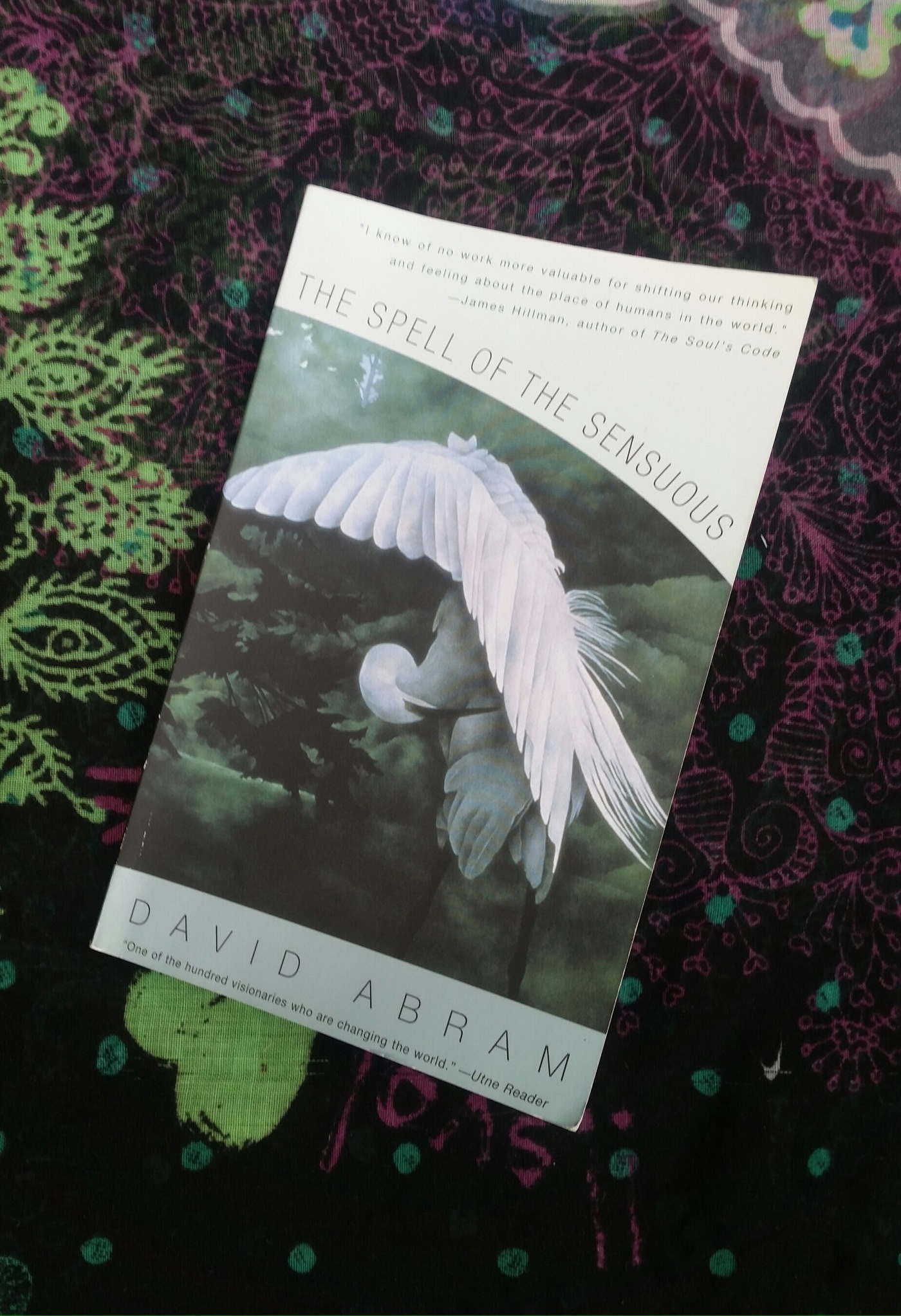 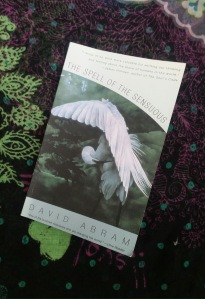 As we have evolved, the way we understand the world around us has changed. Nature plays a less obvious part in our lives than it once did, and we pay far more attention to technological devices and man made structures. The Spell of the Sensuous aims to explore the reasons for this, and to demonstrate how we might improve our lives by reconnecting with the natural world. It is a book that successfully merges anthropology, philosophy and ecology, and I expect it will hold the intrigue of anyone with an interest in one or more of these disciplines.

A particular curiosity of mine concerns perception, and how it alters the way we experience, so I was delighted to see the book began with that aspect. Abram considers the feeling of connectedness we get when we truly immerse ourselves in our surroundings, becoming conscious of everything our senses are telling us as we do in the practice of mindfulness. He argues that we are in essence inseparable from the things we perceive, and are in a reciprocal dance with the earth, plants and animals. He relies heavily on the ideas of Maurice Merleau-Ponty as support; a philosopher I hadn’t studied before but found intriguing. Early on in the book we are given the most convincing explanation for a belief in animism I have come across.

The philosophical aspect of the book continues with a fresh take, for me at least, on Socrates and Plato. While they were questioning the eternal objective meaning behind words such as ‘justice’, ‘virtue’, ‘table’ and ‘cloud’ in the name of progress, they were unknowingly separating us from the flowing, ever-changing ideas themselves. They were abstracting them, moving our awareness from the thing in itself to a human representation of it.

Simultaneously our written language was developing from pictures to phonetics, which Abram sees as a further abstraction. He gives a detailed account of how written language evolved, which is worthwhile and informative. It made me think about how writing has the effect of making words more permanent, and taking our attention away from the present moment: we can, after all, go back to a story anytime and so have less need to commit things to memory. This is something that didn’t exist previously. Instead it used to be that myths were created and retold orally, to communicate practical knowledge about the way animals behave or the properties of plants, for example. The oral tradition has remained with many indigenous peoples in modern times; most abhorring the written word as something that removes the immediacy of experience.

There has been a return of interest in ancient cultural practices lately, in particular shamanic healing, but Abram suggests that the way we are taught to perceive gets in the way of us having a proper appreciation of them.

‘“Shamanism” has come to connote an alternative form of therapy; the emphasis, among these new practitioners of popular shamanism, is on personal insight and curing. These are noble aims, to be sure, yet they are secondary to, and derivative from, the primary role of the indigenous shaman, a role that cannot be fulfilled without long and sustained exposure to wild nature, to its patterns and vicissitudes. Mimicking the indigenous shaman’s curative methods without his innate knowledge of the wider natural community cannot, if I am correct, do anything more than trade certain symptoms for others.’

There is a wealth of information in the pages that follow about the particular practices of indigenous tribes, both now and in the ancient past. Abram discloses myths, stories and beliefs of wide ranging peoples including the Apache, Inuit, Aborigine and Koyukon. I found it fascinating to learn about their understandings of the sun, moon, wind, rain and landscape, and how for the most part man does not have an earned right to, but is actually inherently part of, the workings of the universe. It makes the actions of modern man feel quite unforgivable, to think that many of these peoples have been forced out of their territories.

In stark contrast, Abram writes about the coming of Christianity, and how bible stories shifted our focus from personified forces of nature toward a more ego centric point of view that puts man and his morals above all else.

The book is well written on the whole, and accessible to the layman with very little prior knowledge of philosophy required. There are some nice sections of prose scattered among the anecdotes and musings too, which were a joy to read.

Unfortunately the second half of the book felt a bit repetitive to me. Although there were some gems to find such as the ancient view of time being one and the same concept as space, the circular nature of all things, and a brief foray into the Kabbalah, I didn’t feel that much more was added to the core points made in the first few chapters.

The arguments presented are one-sided, presumably in attempt to persuade the reader that he is missing out by living a modern life, but I found it refreshing to read an in-depth account of perception that does not have humanity at its centre. Overall I consider it to be of more value from an anthropological point of view than as a persuasion to live ecologically, or indeed to change the reader’s philosophical outlook. But it did lead me to more questions about how we define truth, and how could we be sure that one way of perceiving was more correct or natural over another, which is lasting food for thought.

3 thoughts on “The Spell of the Sensuous – David Abram”