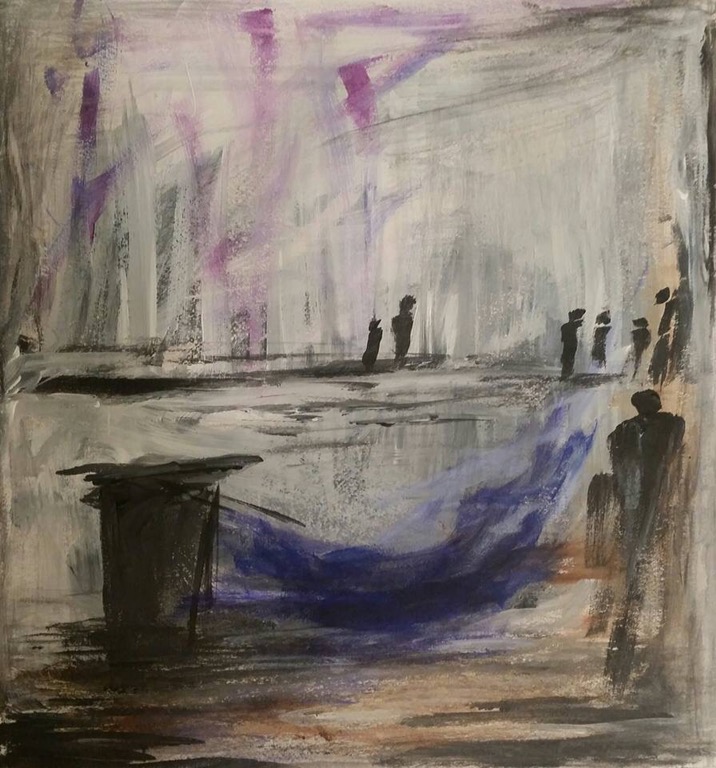 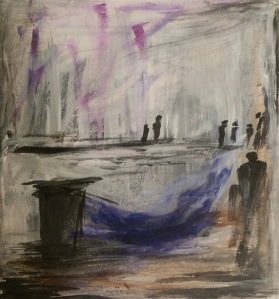 “So you definitely saw purple?” Hertz quizzed me back at the hotel.

“I knew we were right to name you Purple, it’s obviously the colour you see anything magical in.” Hertz seemed satisfied with his own judgement.

“Well it doesn’t matter now.” Ida dispelled his gloating with a flick of her wrist. “The question is what are we going to do? That poor woman was quite distressed. She recognised us.”

“Do you think she’s a dream traveller too?” I asked. It was the obvious explanation, though to our knowledge we had been the only travellers in the last dreamscape we occupied. The dowager, or Jean as she seemed to be known here, had grown wings, just before we left. Maybe the ability to travel had come about with them somehow…

“Could be, could be.” Hertz was scratching his antler roots. It was unusual to see him so perplexed, I didn’t know whether to be concerned or amused.

“We have to find her, and talk to her alone,” Ida said, “she needs our help.”

Hertz and I nodded slowly, without a clue as to how we could do that. I’d already tried my usual trick of isolating myself in a tub and dowsing the inner silence for a vision of her, but visions weren’t coming so easily since we’d slipped into reality. Perhaps I wasn’t comfortable enough here, or hadn’t got my bearings. Perhaps I feared being thrown back into a random dreamscape without my friends.

“Well I’m going to start looking,” Ida decided, opening the window. She had been the closest to the dowager Jean in the dreamscape and was particularly agitated by her appearance.

“Well you’re not going out like that are you?” Hertz mocked. The old woman had taken on her owl form and was about to take flight. “You won’t be able to see a thing, dear!”

“Maybe so, but these ears’ll see me right. I’ve heard every sound that woman is capable of. I’ll find her!”

Hertz and I looked at one another doubtfully, but helped her out of the window anyway.

I went for a walk in the park to get some fresh air and exercise my own animal form. As a cat, dusk was the best time to explore, and it’s amazing what a different perspective can do for your thinking. I liked the park very much, even though it was often full of raccoons who sniggered at me. I scampered around for an hour or so, enjoying the satisfying rough feeling of tree bark as I rubbed up against it, chasing my tail, and hiding in the grass to stalk mice. Hertz always said I wasn’t skilful enough to catch anything, but the truth was I felt too badly for the little things and always let them go.

Exhausted and back in my human form, I made my way to my favourite spot where I sat myself down on a large piece of driftwood and looked out to sea.

“You sure like water a lot, for a cat.” Startled, I spun around and tried to make myself look big. Behind me was a face I recognised from the incident at the library. I felt my eyes narrowing in suspicion.

“You were with the dowager Jean when she screamed.”

My accusation was met with laughter.

The young man showed me his raccoon form. He pattered over to the waste bin by the road, pulled out a pizza box with his teeth, and brought it to me.

“Ta-da!” He looked very pleased with himself as he transformed back into a human.

“I’m Felix. I live at the institution with Jean, but I know how to get out.”

“You don’t know about the institution? Well you’ve been lucky so far, but trust me, you start telling people you come from a dreamland and can use magic to turn into a raccoon, and you’ll end up there.”

“It’s a place for people with magic powers?” I was quite excited at this prospect. Maybe we didn’t have to get jobs and pretend to worship the money god after all!

“Well. Sort of. It’s not generally thought of as magic here, it’s thought of as illness. They have you take pills to reverse your belief in magic, to break down the memories of the dream worlds and to keep you here in reality.”

My jaw dropped. I felt the hairs on the back of my neck rising. He may be able to transform, but could I trust what he said? This sounded like a trap, or a horror story. I stood to leave.

“Hey, it’s not all bad. They give you a place to sleep, food to eat.” He was devouring the leftover pizza and getting most of it down his already grease-stained t-shirt. I guessed the food in this institution of his wasn’t all that great. “And,” he whispered, “you don’t have to take the pills if you’re smart.” He gave me a wink.

“Where are you from?” I ventured, still in half a mind to run away.

“Somebody else’s dream. But of course the question you should be asking is where are you from.”

I narrowed my eyes again and picked a piece of chewed pizza out of my hair.

“You’re from Jean’s dream.” He flashed me a smug look, and before I could answer he had taken back his raccoon form and was stumbling back towards town, drunk on hysterical laughter.

Note: if you would like to catch up on previous episodes of this story, you can find them on the menu of my homepage under Creative: The Old Woman, The Stag, and Me.

5 thoughts on “7. Somebody Else’s Dream”