If you haven’t read them yet, you might like to catch up with The Holly King’s Apprentice Part 1 and Part 2. 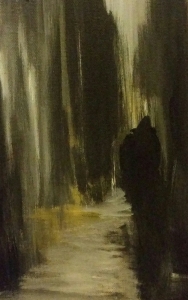 For 6 whole days I practiced reaching the realm of Ain Soph without the Holly King’s aid. I was utterly preoccupied with the strange task that had been set for me; so much so that I did very little else. It was difficult at first, because I hadn’t a clue where to start, but with practice I found a method that worked.

The terrifying, foreboding doom that characterised my depression was like a shadow on the peripheries of my vision. I could never quite catch a glimpse of it, but if I approached with stillness of mind instead of chaotic thought and panic, it wasn’t nearly so elusive. So, I began to teach myself to shut down the offending thoughts at their root. It was as though some other part of me was persuading them to be discrete; convincing them it was a matter of life and death. It was like telling a child to stay quiet in the closet to hide from an intruder.

In the moments when there were no thoughts, I managed to return to the place the Holly King had called Ain Soph. I became weightless once again, and at one with the darkness that surrounded me. Each time the child in the closet forgot it was meant to be silent, the leviathan awoke and we had to start all over again.

On that 6th day, the whole exercise went smoothly. I remained in the desired state for what must have been approaching an hour. And then, for the first time, I saw the sleeping leviathan. It took all the strength I had not to jerk awake with shock; not to alter the rhythm of my breath. It was a colossal, grey, shapeless beast. It had no limbs, and no head to speak of: just three eyes and a dragon-like tail. All three eyes were closed, but they glistened in the light emitted by thousands of tiny stars. And there I was; poised to stalk the stars upon which the leviathan slept.

How would you approach a monster sleeping upon the treasure you seek? How about if you had to do it without forming a single thought in your mind? I don’t know how I did it. Such things are beyond knowledge, I have come to learn, and bear only an intuitive sort of understanding. The experience was something akin to willing a movement in a lucid dream. I looked at those stars, and I floated over to them without a body and without a thought.

And then there was an eye. A shining, ultraviolet eye that was bigger than my home; and, from somewhere below, a deafening roar. I fell back into my body, hitting reality like a cold pavement from 7 storeys up. I was shaking uncontrollably, my limbs were numb and my consciousness was in shock at having to deal with knowable things again. I drank readily of the water I kept by my side, and only when I spoke aloud – what the fuck? – did I notice my lap was covered in specks of sparkling dust, like glitter. I scooped it into a handkerchief as best I could, tied it up with a knot and put it into my coat pocket. I needed some air. It was 5am.

I took a route across the suburbs that was well-lit but unlikely to be used by others at that time of morning. It led out onto some open fields, and made me feel a little less choked by asphalt. But that day I was not alone. That day, there was a tall figure running across the fields at great speed. His feet barely seemed to touch the ground, like a skilled and graceful dancer. He pulled behind him a glistening net that spanned the whole width of a field. I screwed up my eyes and looked again, thinking perhaps I was delirious with lack of sleep. But no, there he was in his trench coat, ripped jeans and biker boots, spreading a film of tiny stars upon the grass and winter wheat: the Holly King. He saw me, too.

“Hey there! Glad you could make it, I could use a bit of help!” He hollered from a distance and beckoned me to join him. I found a gap in the hedge to squeeze through and trudged along to his side in a cold that bit harder the closer to him I got. He was looking healthier still than the last time I saw him: his cheeks were rosy and he had developed significant muscle tone. I pulled the handkerchief out from my pocket and showed him the contents. He clapped his hands together, “marvellous!”. Then, with surprising delicacy for such a strong finger and thumb, he pulled the tiny stars up from the fabric and showed me that they had formed a thin, net blanket upon being exposed to the air.

Then he showed me how to lay out the stolen stars. I ran through the cold air dragging my net, just like him! My offerings were pitiful in quantity when compared to his, but nonetheless I felt a warmth inside that had been missing for so long, at the thought I’d achieved something so out of the ordinary. I felt like I had worth; a purpose, no matter how left field. The Holly King put a sturdy hand on my shoulder as we admired our (mainly his) handiwork. I shivered.

My flash fiction collection Fragments of Perception is available now in paperback and e-book! For the full blurb, and to find out where to get your copy, please visit my books page.