Stephen Oram is one of my favourite contemporary authors. His debut novel, Quantum Confessions, had a significant influence on me; in fact, it was the book that inspired me to start writing my own. His work primarily examines the way our society works, and how it could be affected by technological developments in the near-future. Stephen works closely with future thinkers and scientists, most notably as part of the European Human Brain Project, and extrapolates their research into accessible, thought-provoking narratives. There is often a dystopian feel there, a warning perhaps, which is all the more poignant once you realise how close to reality some of the ideas really are. Recently, I was lucky enough to be selected to share some of my flash fiction at an event he curates for Virtual Futures, and he kindly agreed to let me interview him for the Orchid’s Lantern blog. I hope you enjoy reading his well-considered answers as much as I did.

Who, or what, inspired you to become an author?

I’ve always loved reading all sorts, but especially the edgy science fiction and weird stuff. I guess it was the early William Gibson and Jeff Noon that really stuck with me, so I’d name them as inspiration. But, about becoming an author – there was a particular moment in my life when for a whole variety of reasons I was prompted to find something creative to do that I enjoyed. I tried painting and photography and was rubbish, and then after a short course in creative writing, I tried my hand at writing a novel. And the rest, as they say, is history.

Your novels are both very clever at weaving threads of socio-political ideas with cutting-edge tech, while also telling gripping stories about realistic characters. Does that take a lot of plotting to achieve, or do you find the books come together intuitively as you write?

Yes and no. I tend to work out the overarching socio-political idea I want to play around with first alongside the main characters I think will be interesting to explore that with. The technology comes next, deciding what feels right for the world I’m setting the story in. After that, I’ll get a sense of the storyline and plot it out at a very high-level. Once I can feel it all coming together, I get into the nitty-gritty of the detail – the background world, the characters, the technology and really importantly how the characters will react and behave in this experimental world I’m creating. For the short pieces I do this all in my head, but for novels, it has to be written down in a structured way. Of course, the plot changes as the story develops, so nothing is set in stone.

In your book Fluence, an individual’s place in society and quality of life depends upon their ability to gain influence points, like an extreme result of social media development. Although it sounds like a nightmare, some of the higher-level games you imagined for earning points sound quite fun! Would you be tempted to play them, or would you drop out of the system as an outlier?

I’m sure I would be an outlier, that’s my natural home, although I’ve always been bad at committing to any identifiable group. However, I’d love to play some of those games. One of the main things I realised as I was writing Fluence was how much people matter to me. So, although the games would be great fun to play, they’d be horrible if you had to play them with pretty much any of those characters in Fluence.

What made you decide to release a collection of flash fiction (Eating Robots and Other Stories) having previously published two novels, and what challenges did that format bring?

A few things came together. I was writing short pieces for my blog, and readers liked them. I was asked to become the Author in Residence for Virtual Futures, a fantastic group of folk doing great stuff – look them up. At the same time, all these great ideas kept popping into my head while I was trying to write Fluence and to avoid cramming them into the novel I decided to write them as short pieces. As far as the challenges the format brings – condensing an idea, character, story etc. into a thousand words is really hard. Every word counts. I think the most challenging aspect is that to convey anything meaningful in such a short space you have to rely on existing knowledge of the readers. Not all readers are the same, and I’m committed to writing in a way that non-techy and non-science fiction fans can enjoy. Also, I’m trying to help readers see the world differently, so there’s only so much relying on existing knowledge that’s helpful. Despite all that, or maybe because of it, I love writing them. What I’m most struck by is how long they take to write, from initial idea to final piece – I reckon about three weeks minimum because you need to let things settle every now and again to get the best piece of work.

Eating Robots is an intriguing title. Can you tell me a bit about where it came from?

I was fortunate enough to be co-lead on a project with the European Human Brain Project looking at how science fiction can help scientists talk to each other and communicate with the public. As a part of that collaboration, I visited the Bristol Robotics Lab for a day with two other authors and two social scientists. It was an intriguing and informative day, and as a result, I wrote a story encompassing, and embellishing, all the tech I’d seen. The story also touches on the ethical dilemmas we discussed with the roboticists. And, there were robots that lived off dead flies, so the title sort of wrote itself. I also felt the ambiguity of the title conveyed a large part of what I was trying to do with the collection. That is, offer possible futures that are both positive and negative, depending on who you are.

Your stories paint a dark vision of the future in which technology we have designed has unintended social consequences. Is the outlook for humanity really that bad?

No. Well, it doesn’t have to be. Not if we take the future seriously. I’ve been using the phrase, “the future is ours and it’s up for grabs,” and I really believe it. Sometimes it feels as if we’ve given up and handed our future over to the giant corporates of the world. Hopefully, the recent Facebook problems may have helped reverse that a little.
Another thing I worry about is what seems to be the over-optimism of technologists. After all, humans are complex beings to interact with, and there are plenty of problems with ‘software glitches’ as it is, let alone the super-complex stuff that’s on its way. Oh, and while I’m ranting, the belief that the human brain is simply wetware that can be replicated by soft and hardware (artificial intelligence) seems flawed – I’m sure there’s more to us than that. So, the outlook might be bleak, but it doesn’t have to be. Of course, where you live on the planet and where you fit into the social structures makes a huge difference too. After all, one person’s utopia is often another’s dystopia. But, I do believe in humanity’s wonderful warmth despite our ability to ignore the really horrible stuff we’re doing. As I say, “the future is ours and it’s up for grabs.” How’s that for a classic ‘on the fence’ answer?

What is your involvement with Virtual Futures and how did that come about?

About two years ago I went to a Virtual Futures Salon on sex robots. As a result, I wrote a short piece called S{T}IMULATION and sent it to the VF director, Luke Robert Mason, to ask if he’d check the validity of the tech in the story. He really enjoyed it and asked if I’d like to write flash fiction pieces to read at future events and I had great fun doing that for a while. The panellists and the audience loved it too so we decided to start near-future fiction events for which I’m the lead curator. We’ve been very fortunate with who has submitted (including both of your wonderful stories), and we’re hoping to publish an anthology or two. I’m particularly proud that we are attracting emerging writers as well as the more established; for many, it’s their first public reading, and yet the standard is very high. The British Science Fiction Association critical journal Vector has written a couple of articles about the events, including mention of your wonderful story, The Test.

Of all the future tech you have researched, what excites you the most?

I have a sneaky feeling that the stuff that excites me also scares me. Artificial intelligence is one. I have a number of worries, but I can see its great potential – a lot of which is familiar to us. The future tech that gets less airtime in any meaningful way is blockchain. The idea that centrally controlled systems could be replaced by a distributed model is exciting. A practical idea I’ve come across is tracking products from source to disposal by adding an extra identifier at each step along the way. That way their provenance would be known as well as where they are eventually recycled (or not). It’s worth checking out Vinay Gupta at a Virtual Futures Salon on this. Something I’d like to put more thought into is the possibility to re-engineer democracy and bureaucracies using AI and blockchain – it appeals to the optimist anarchist in me. I’m also fascinated by the idea of biological wearable technology, but I’ve only just started thinking about it.

If you could choose three books to take into a dystopian future where the novel has been wiped out, which would you take?

That is such a hard question. I think it would be important to re-introduce high-quality short novels. So, my first choice would be WE by Yevgeny Zamyatin because I love the way the inhabitants willingly want the world they’ve got, despite… I won’t give any spoilers, but if you haven’t read it, you should. Next, I’d choose The Wasp Factory by Iain Banks because it’s brilliant. Orwell has to be in there, and one of my favourite books is Keep the Aspidistra Flying, but it’s not short, so I guess I’d have to go with Animal Farm.

Finally, what is next for you?

Lots. Probably too much. In no particular order: another collection, Nudge the Future (Vol.2); a new novel – the first draft is complete and with the editor; a panel appearance at the Bradford Literary Festival on AI and Robotics; more work with scientists and future tech folk; a series of flash fiction in Linux User and Developer, including Happy Forever Day and The Blockchain Blues; and I’m just starting to think about the 2019 near-future fiction events. Although, I reserve the right to add or subtract from this list at any moment!

Thank you for your time, Stephen, that was great!

If you’d like to know more about Stephen Oram, you can visit his website and blog here. His books are available from all the usual places, but I have included some links below for convenience.

Eating Robots and Other Stories: Amazon UK  Amazon US 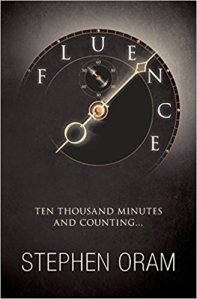 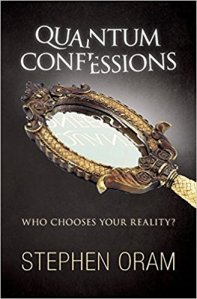