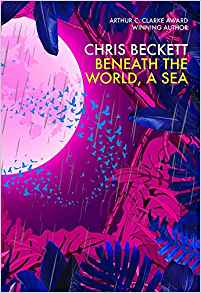 I can’t tell you how excited I was to discover this book. Like many other reviewers, I was initially pulled in by the magnificent cover but stayed for the promise of unconscious mind exploration: exactly what I love to read.

A policeman is called to investigate a number of killings in the Submundo Delta: a highly unusual but naturally occurring basin in South America. To reach it he must travel by boat through the Zona del Olvido: a region people forget the instant they leave it, including everything they did there. (Just like sleep, I thought. A gateway to the unconscious.) But the creatures that are being killed aren’t people. Not exactly…

The Duendes are a beautifully original idea. Among so many imaginings in contemporary novels of what could exist in city life and technology, it’s refreshing to find such visions of the natural world and biology. Back to our roots, it seems was Beckett’s intention. I pictured the creatures as a kind of amphibious pixie. Whenever they are near, you find your innermost fears and urges exposed. Would that be embarrassing or freeing?

Beneath the World, a Sea feels distinctly Ballardian, with its resort community, strange crime and hidden motives; but it is in equal part a meditation on the nature of consciousness and all the things that lurk beneath the surface of our being. The clever thing about Ballard is that his language actually touches something in the unconscious, pulling the reader asunder and making us feel unnerved or conflicted or dark. The Duendes go some way to matching that, I think. But, because this book has so much to say, its philosophy is sometimes at the expense of such absorbing storytelling techniques. There are long passages of discussion that break the flow of scenes, and although the characters have backstories, they lack the emotional connection that makes readers care what happens to them. The policeman in particular, who is given most ‘airtime’, could drive the narrative a lot more if we felt involved in his plight. Rico, a psychonaut who has delved deeper and deeper into his mind over the years, and Jael, an ex-scientist, are the most interesting to me, but even they feel as though they were mere devices.

The philosophical aspect of Beneath the World, a Sea, however, is spot on. It’s very accessible, and it raises some fundamental questions that have become buried in the unconscious: things we take for granted such as personhood, morality and values. Things we can only see for what they are if we step out of our usual mode of being. All of our lives are built around our collective values and feed back into the echo chamber over and over. Are we the same people when removed from that? Does that scare us?

‘That’s where our civilization has come to,’ Jael said. ‘Consciousness is an illusion! We’re so alienated from our own natures that we deny the reality of the one and only thing that we can know for certain definitely exists, while insisting on the reality of constructs like, for instance, so-called quarks whose supposedly objective existence can only be demonstrated by a long chain of abstract reasoning that ninety-nine per cent of human beings are unable to follow. Talk about fucking alienation!’

The Submundo Delta might not exist in reality, but it seems reasonable to compare it to the experiences people have when attending Ayahuasca ceremonies: life-changing and eye-opening, but not necessarily something you’d want to indulge in for any great duration. And like our native communities who use Ayahuasca, there is a tribe in the book – the Mundino people – who have built a religion around the strange properties of the basin. This led me to ponder how ritualisation and cultural tradition alters our perception of morality.

Although he opens up conflicting ideas about consciousness, Beckett doesn’t force a conclusion upon the reader, and I like that. It means we are left to decide how and if we want to apply this strangeness to our own worldviews, in much the same way as his characters are.

In summary, I really enjoyed Beneath the World, a Sea. It was wonderful to see metaphysical topics being introduced into mainstream fiction, and pitted against science as a valid way of interpreting the human experience. The world itself, with the magenta trees, bluebirds, siren song waters and caves made from roots, was stunning and I will remember it for a long time. The Duendes and the Zona del Olvido made a lasting impression, too. The characters and plot, unfortunately not so much. I nonetheless recommend this novel to anyone with a penchant for the unusual and the big questions in life.

C.R. Dudley is the author of metaphysical sci-fi collections Fragments of Perception and Mind in the Gap. She is an artist, mind explorer, and founder of Orchid’s Lantern press and blog. You can find many of her reviews, articles and flash fiction pieces on this site, or sign up to her newsletter via www.crdudley.com.

If you would like to write for Orchid’s Lantern, please visit our submissions page.